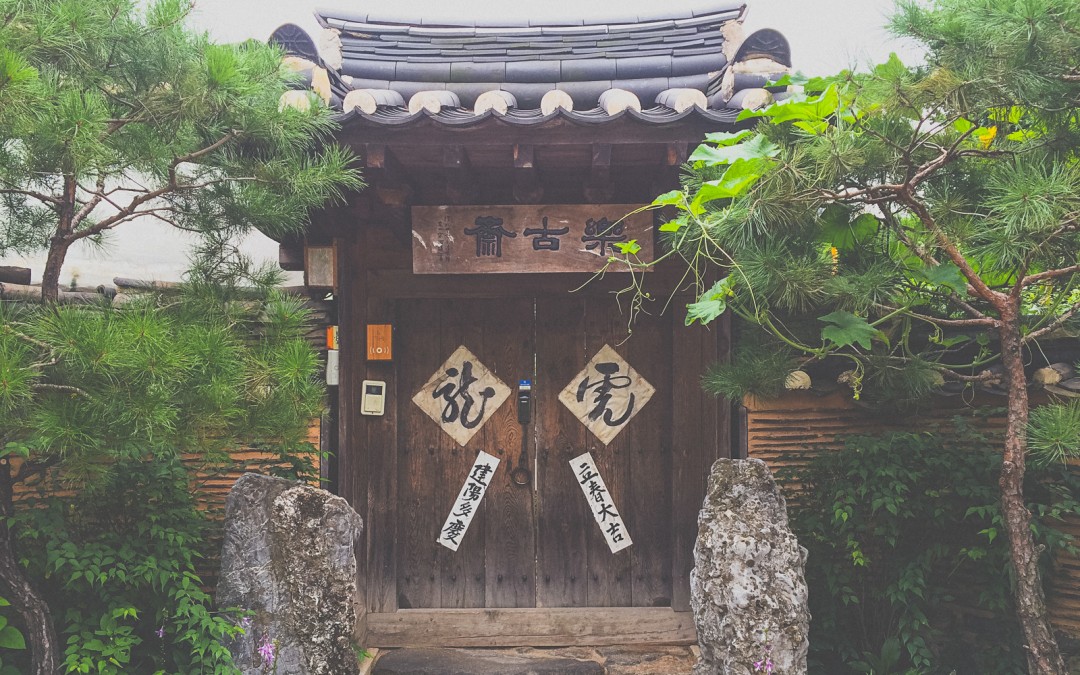 Trying to decide if you should book your stay at Rak Ko Jae?
Jump down to my review summary to see if it is for you!

We arrived one in Seoul one day before our travel partners, so we wanted to take the time to both do something unique and also something restorative, as our friends may or may not be known to have more energy than we do. 😉 I did tons of research and thought of staying in a hotel with a spa, or even hitting up a Jimjilbang (it’s not what it sounds like: 10 Steps to Enjoy a Jimjilbang), but we wanted something that 1- we couldn’t/wouldn’t do elsewhere, and 2- didn’t have the potential of turning into a very awkward situation. I decided that, despite our reservations of sleeping on the floor with our backs that demand comfortable beds, the best way to recover from the jetlag and set the tone for our journey through Korea was a culturally-rich stay in a traditional Korean hanok.

A hanok is simply a traditional Korean house. The han at the beginning of the word means “Korean,” so many of the mainstays of the Korean culture start with this han. These homes are built in accordance with nature and typically consist of a central courtyard, porches for the hot summers, heated floors for the cold winters, and the mattresses are always placed on the floor at night.

After countless hours of research, we decided to book our night at the Rak Ko Jae in Seoul’s Bukchon Hanok Village. Everyone on the interwebs said if you are going to stay in a hanok, you must stay at Rak Ko Jae. And the interwebs are never wrong. It was the most expensive of the options I had found, but not wanting to defy this digitally-found wisdom, we booked our evening in the Far Bedroom. Everyone said it would be worth it.

Everyone on the interwebs said if you are going to stay in a hanok, you must stay at Rak Ko Jae. And the interwebs and never wrong.

We arrived in Seoul in the morning under a cloud of delirium, soon to find ourselves in a physical cloud of haze. Stepping out of the airport, we were immediate hit by the bizarre combination of an oppressive heat and this winter-like haze that would be present for the majority of our time in Seoul. We came to learn that this is normal, and, as much as the locals liked to tell us that there is no pollution in Seoul, it magically disappears as you leave the capital. I call shenanigans. 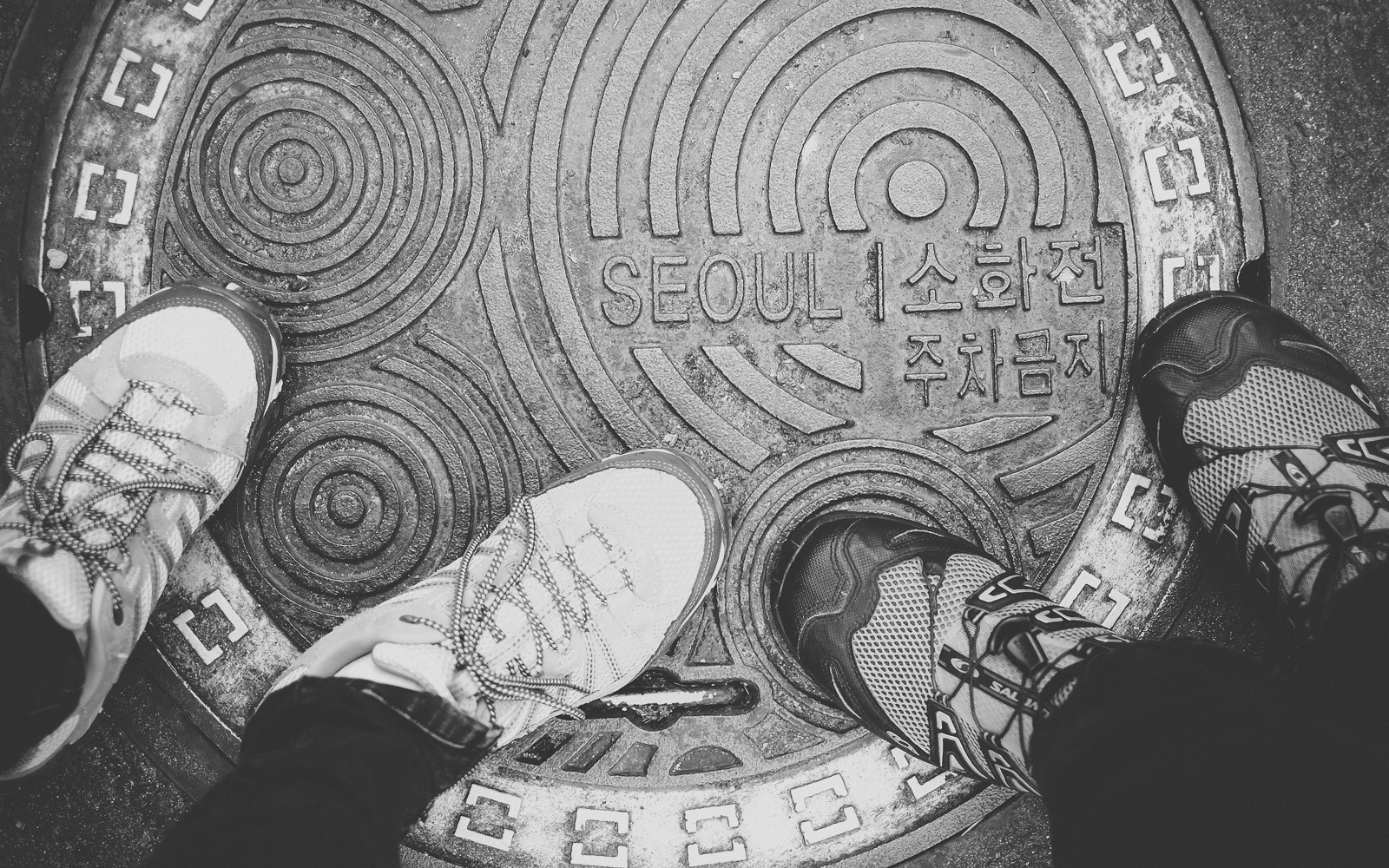 Feet on the ground, no matter how tired.

Too early to check in to our room, we sluggishly made our way to the bus, to the metro, and finally down the right random alleyway to the hanok to drop off our bags. After a few wrong turns, we spotted this little sign which was our only indicator that we were heading in the right direction down an unassuming alley. If you are planning your own stay at Rak Ko Jae, be sure to familiarize yourself with your route from Angok station. It isn’t hard, its just good to know where to turn. 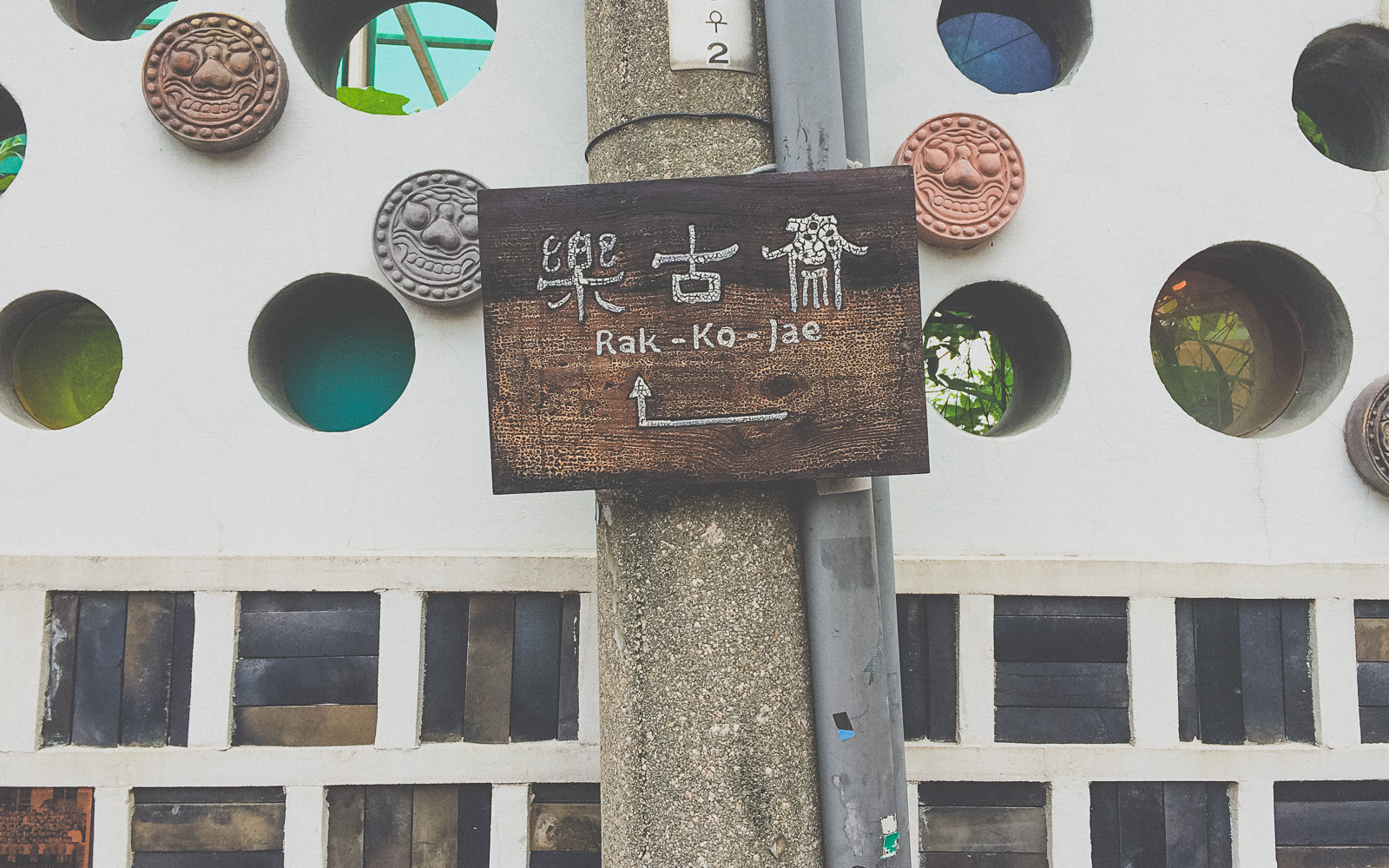 The travel grime and fatigue were strong, but we set out to explore the surrounding  Bukchon Hanok Village, take some photos and test out the new selfie stick. Wandering through the winding streets was truly transporting and it was quickly clear that we were far, far away from Paris (which is the point, right?!). 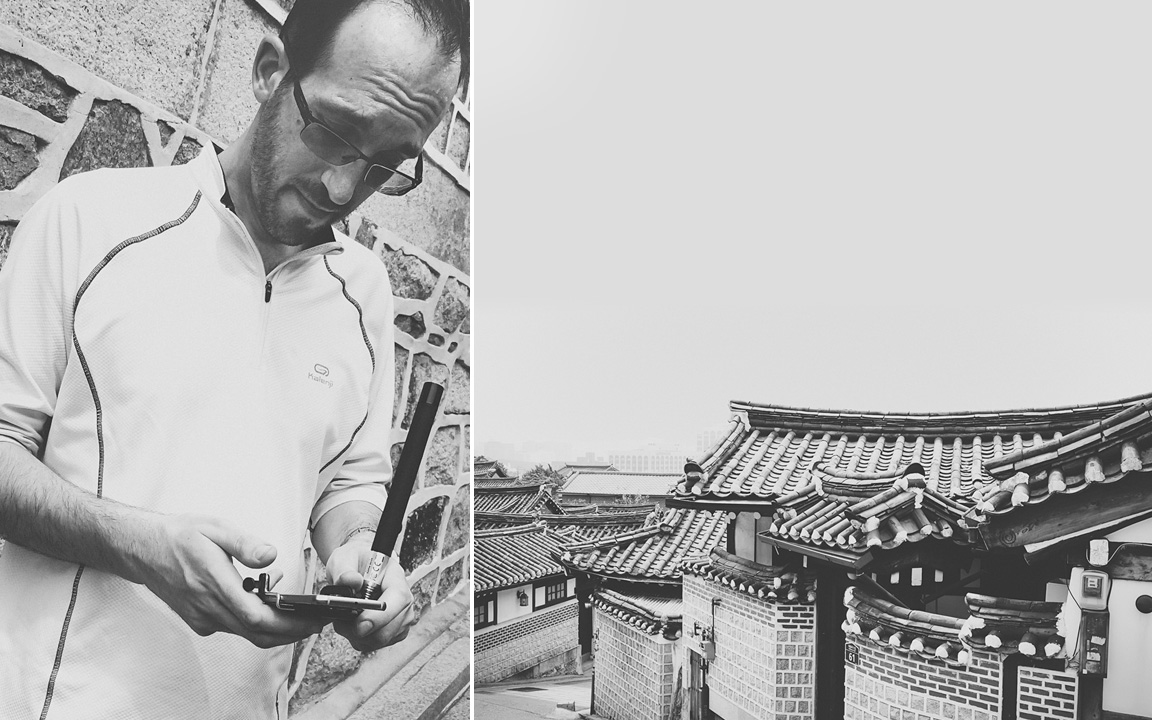 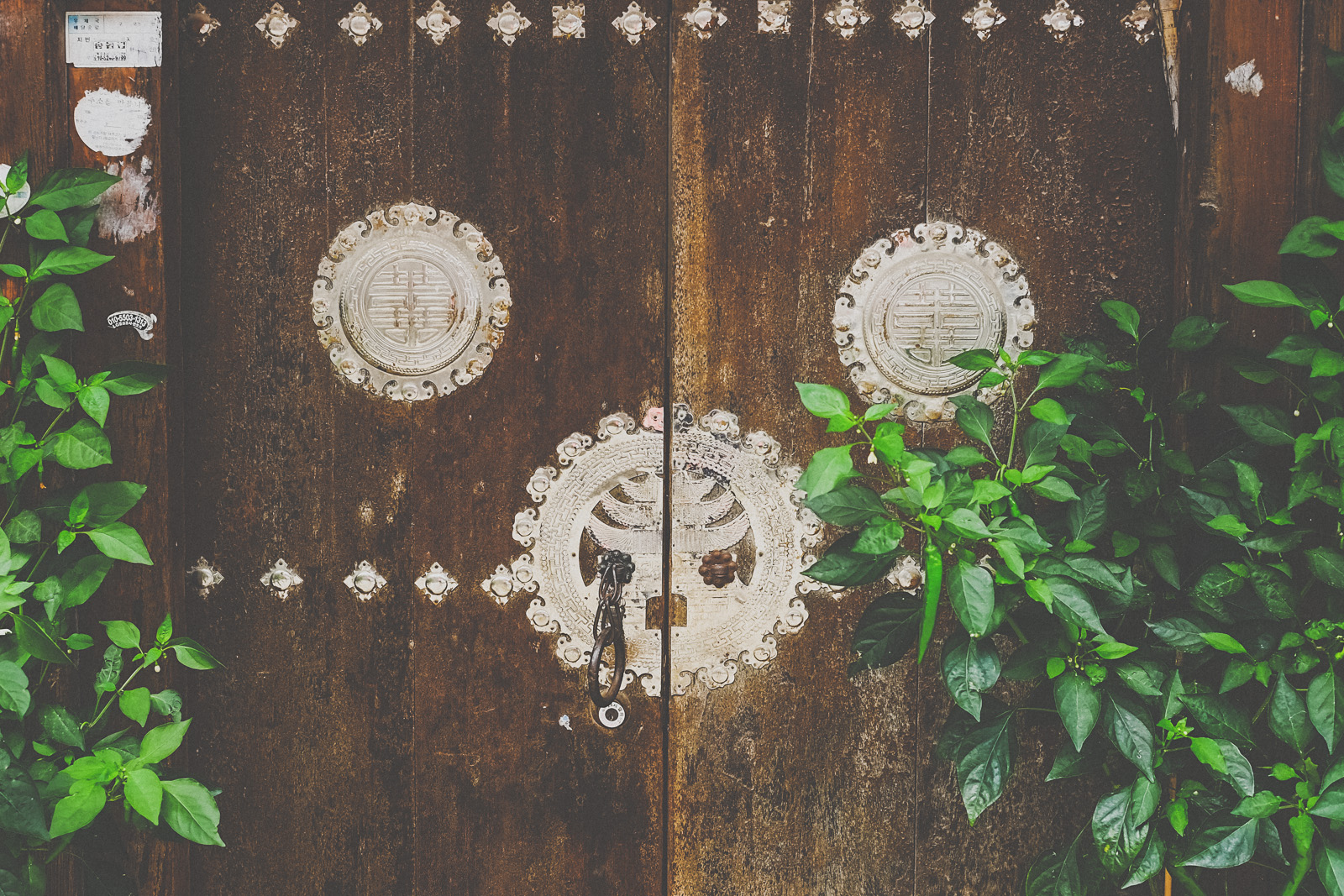 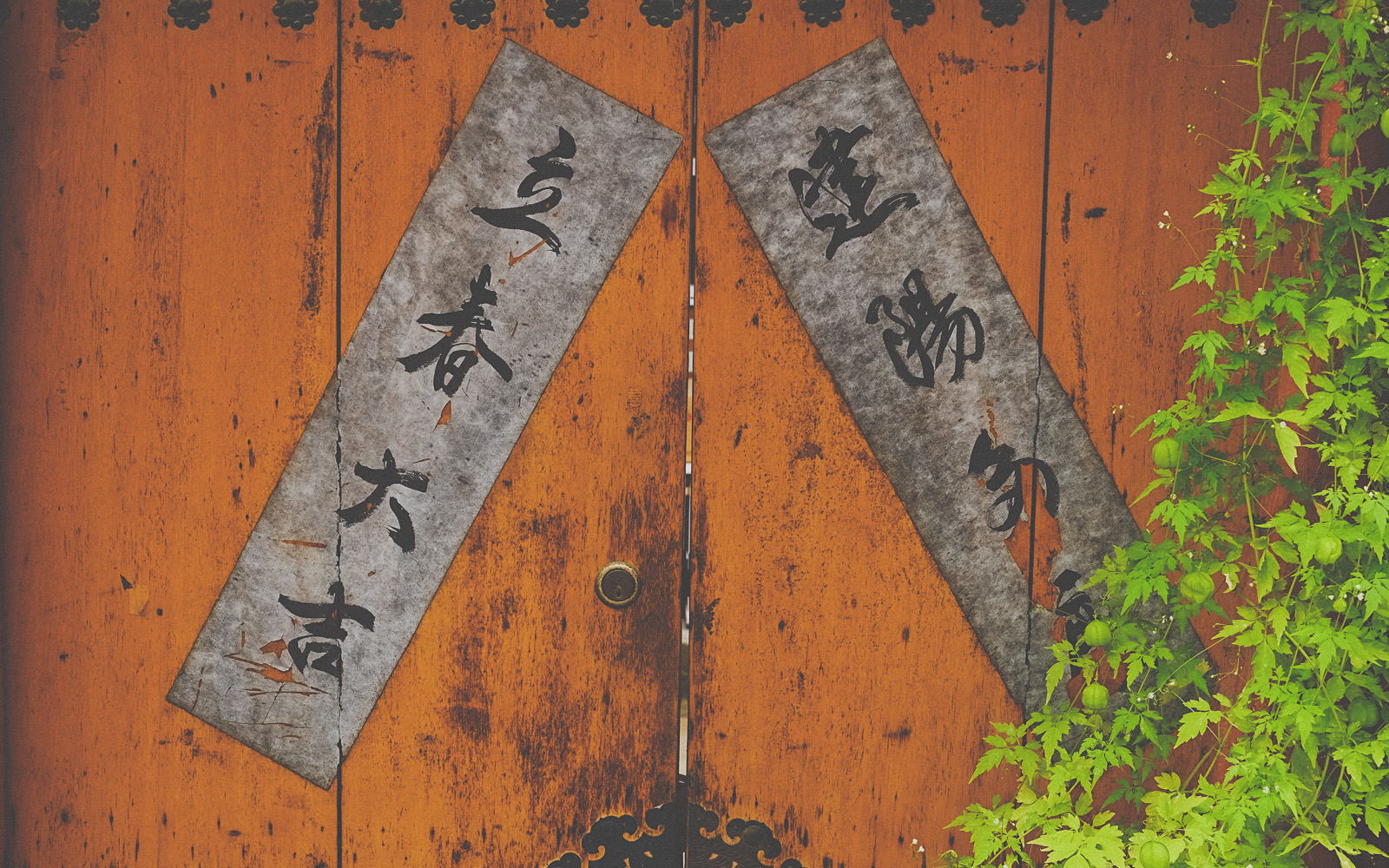 Mildly obsessed with the doors around the village 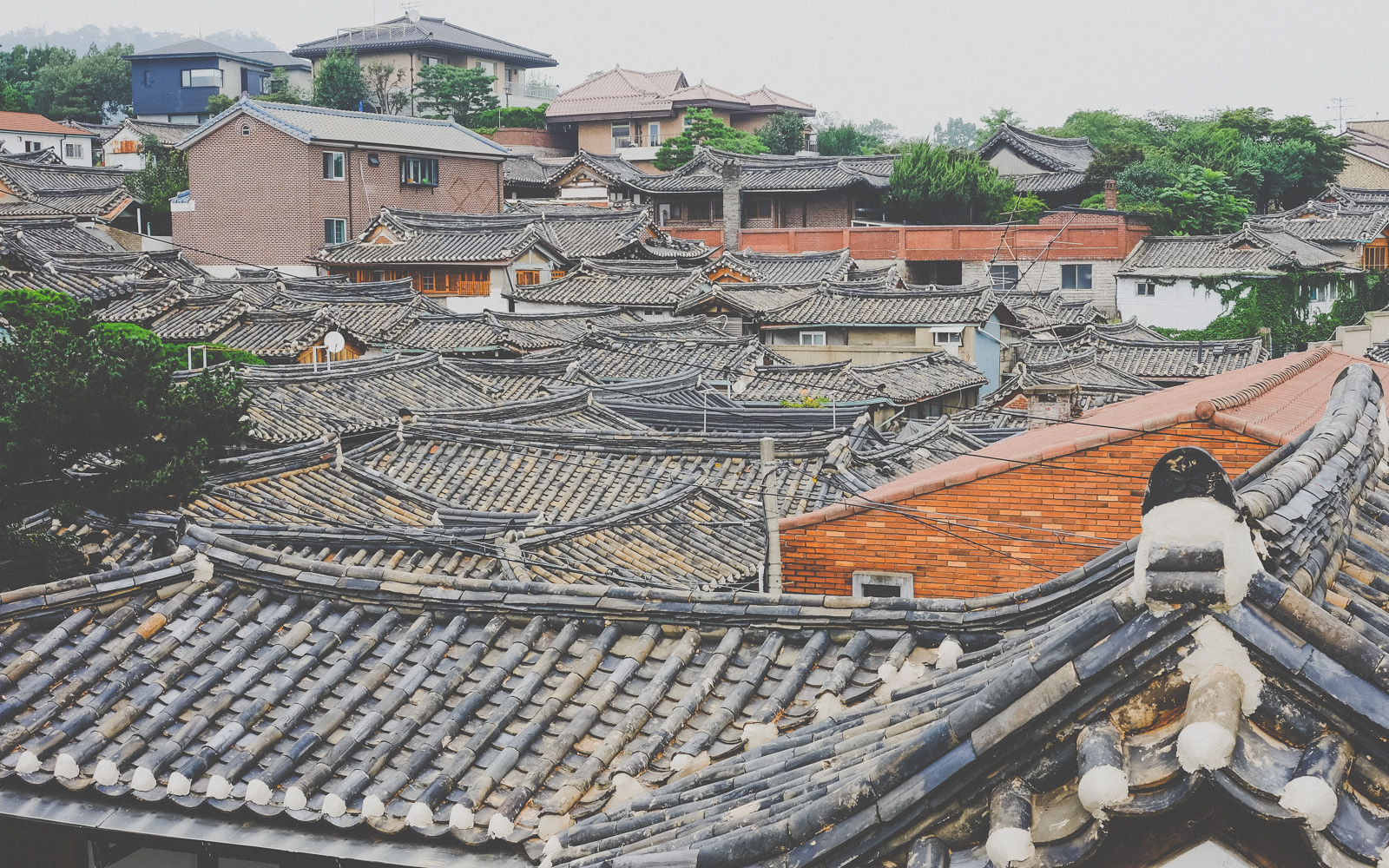 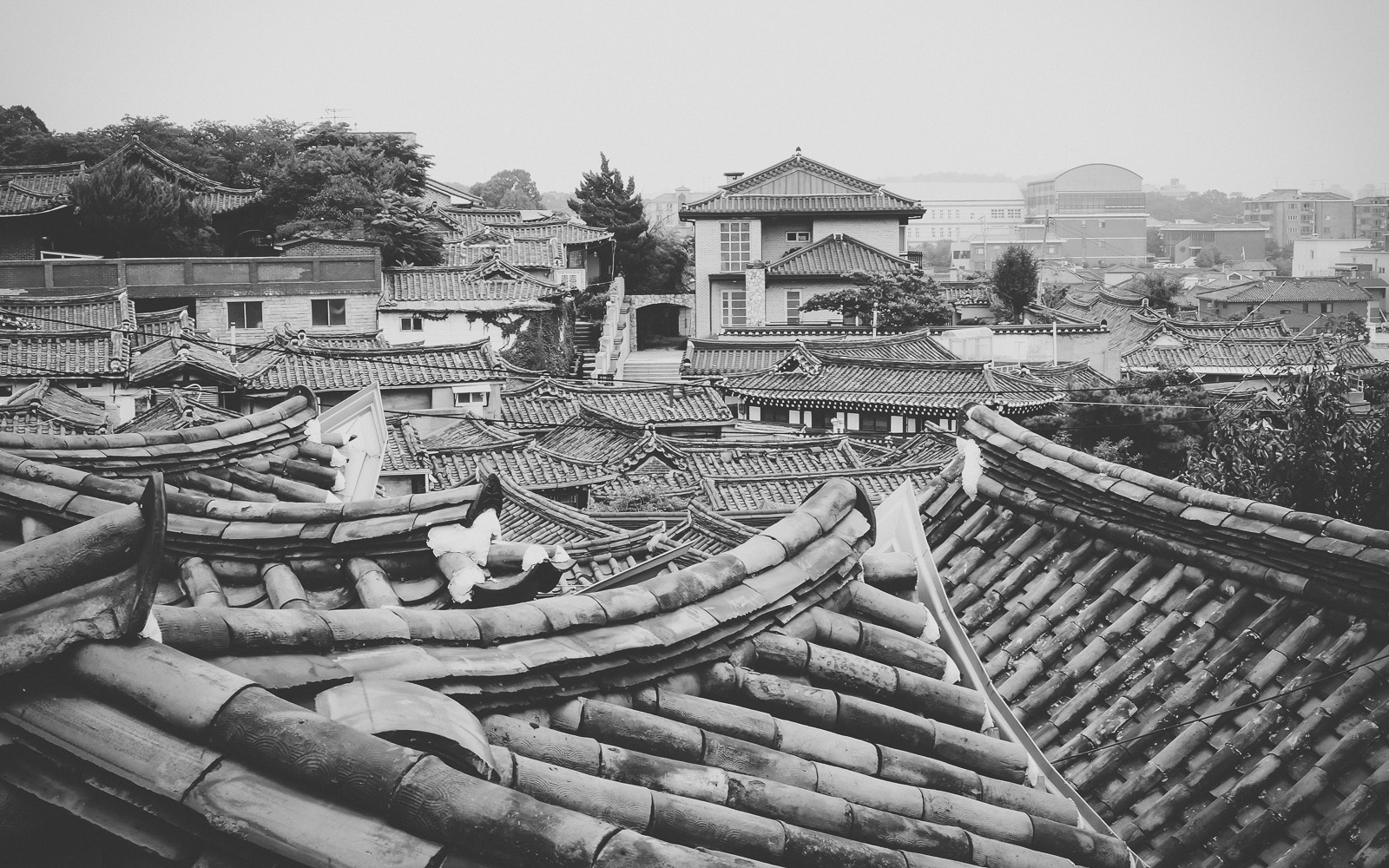 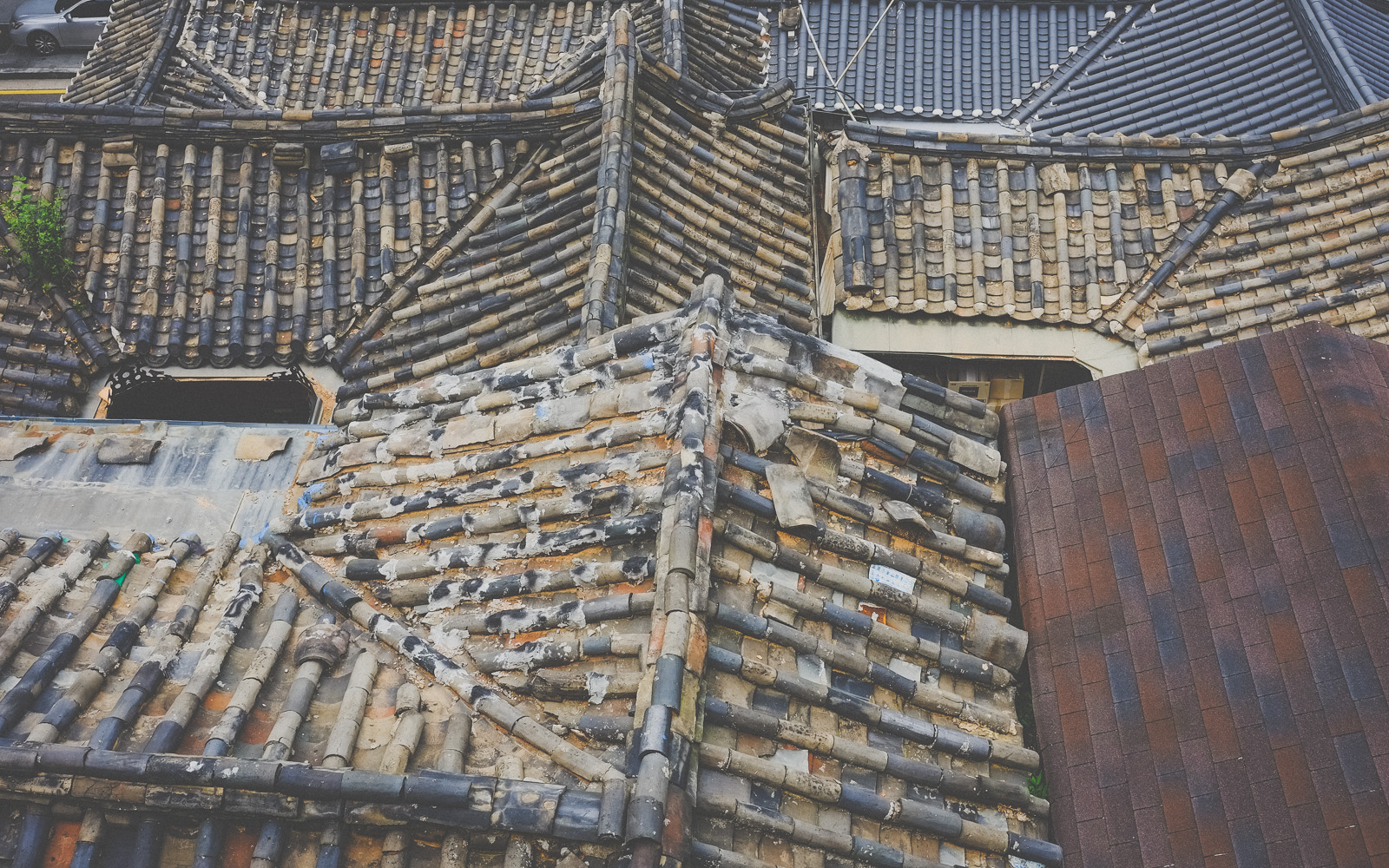 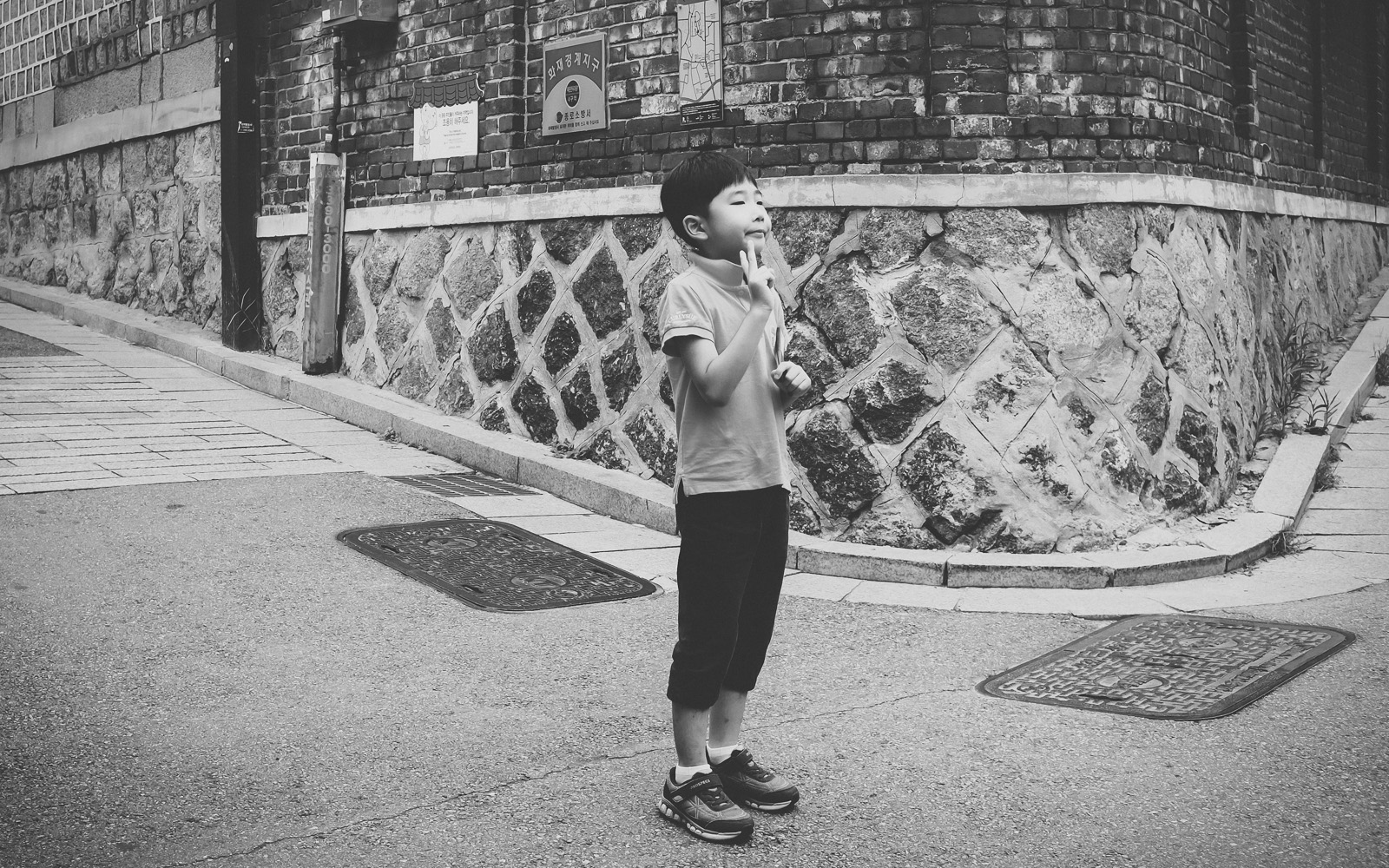 V for Victory! The first time we saw this quintessential photo pose in South Korea. 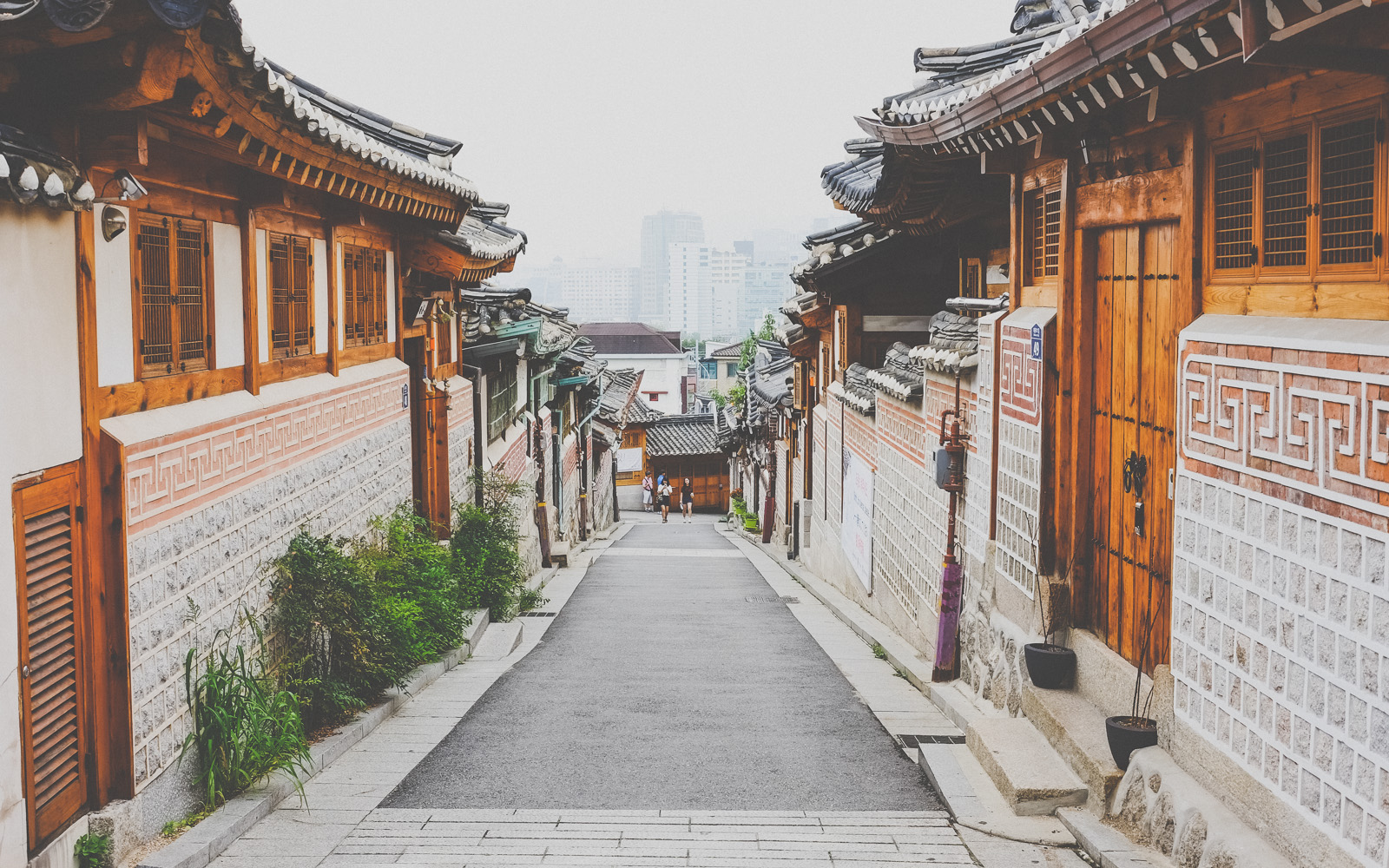 Bukchon Hanok Village and hazy Seoul. If it had been clear, you could have seen the Namsan Tower off in the distance.

After a few hours of wandering on the achiest of feet and experiencing our first meal of chicken ginseng soup (and trying to figure out exactly how to eat it), we were finally able to check in. Having come back in from the streets, it was amazing how quickly the sounds and bustle, just a short block away, faded upon entering the sanctuary that is Rak Ko Jae. I honestly don’t even know how it is so quiet—there is just a simple wall surrounding the complex, but somehow it is QUIET. PEACEFUL. TRANQUIL.

And then we never left. We never stepped foot back into the streets of Seoul until we had passed every single minute possible up until our check-out time.

Our evening started with a yummy but simple Korean dinner: banchan (small appetizer plates similar to what we call apéro in France), a large bowl of chicken ginseng soup, kimchi pancake, various other sides I don’t remember, and a desert. Side note on the soup: there is a WHOLE CHICKEN inside and you eat it all with chopsticks and a spoon. As tasty and health as it is, this was not our favorite type of Korean food simply because it is “maintenance food” (you have to work for it), not to mention with chopsticks. Anyway, we were certifiably full by the end and definitely couldn’t eat it all. We were served at the floor table in our room because it was still too hot outside to eat on the porch, which I think is where the meals are typically served when it isn’t so hot. 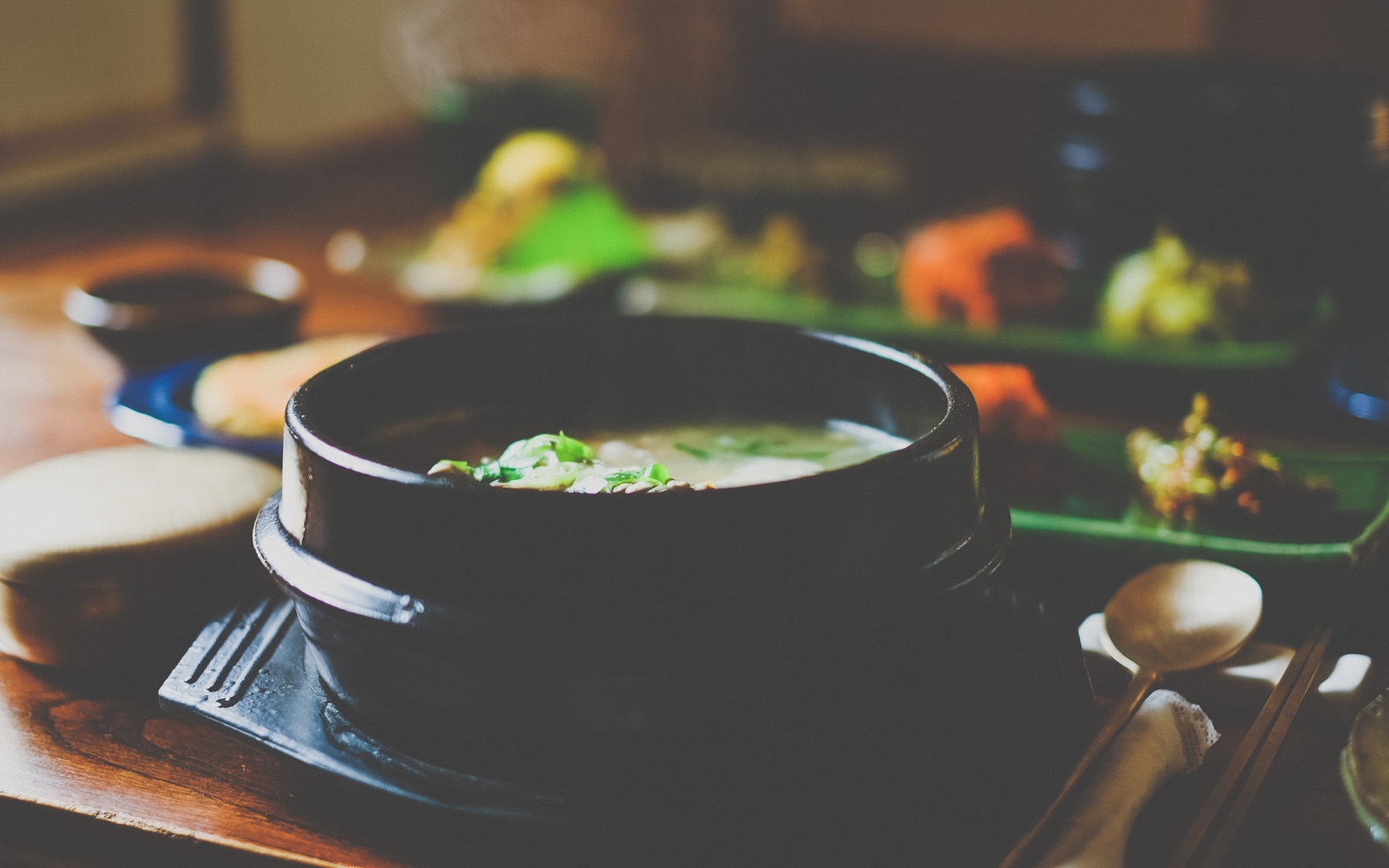 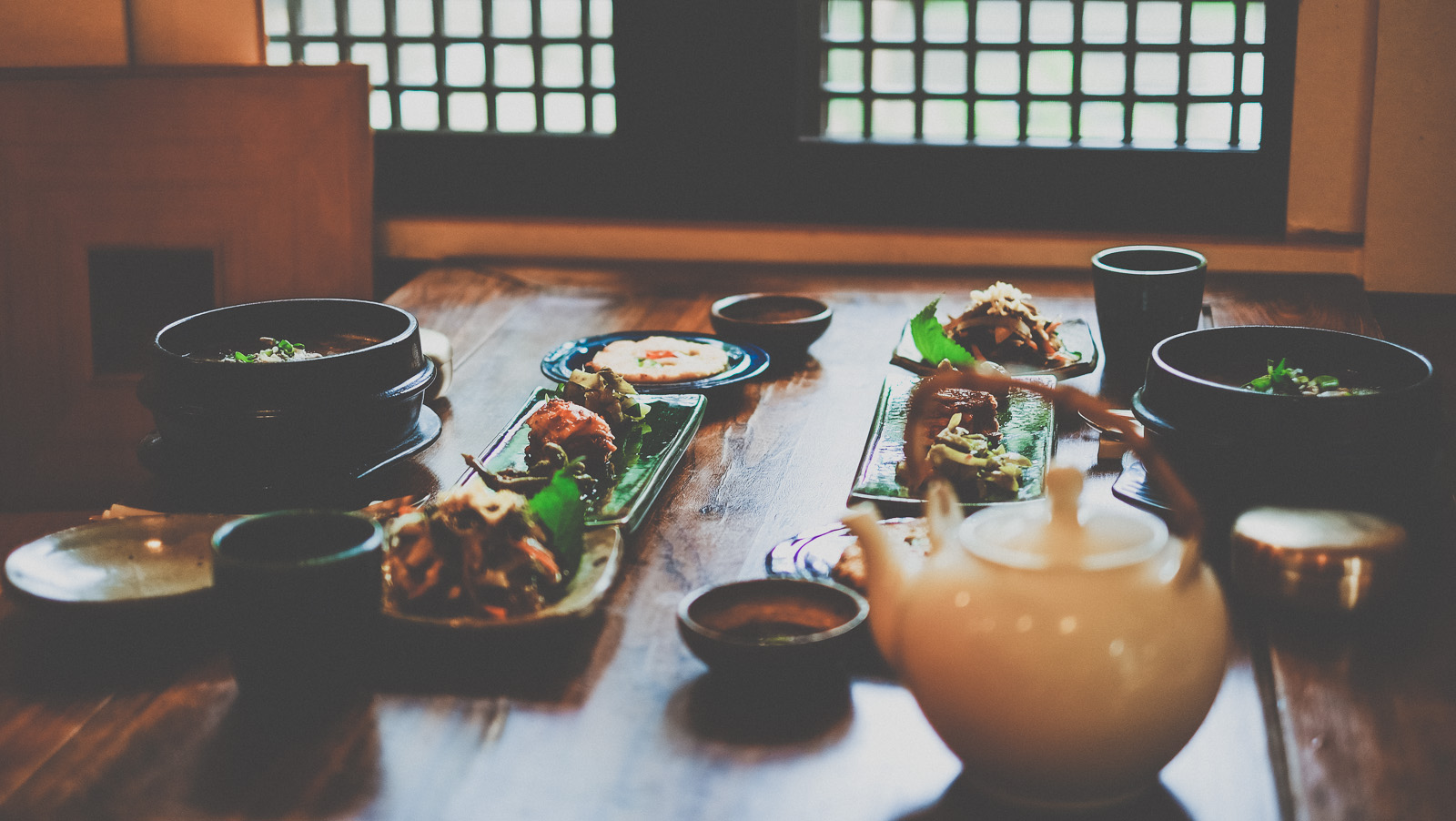 Dinner is served, complete plenty of banchan and tea.

After dinner, we changed into our fancy sauna outfits and made our way to the yellow mud sauna. It was hot. We sweated our way through 10-15 mins, and then it was shower and bedtime. At last. 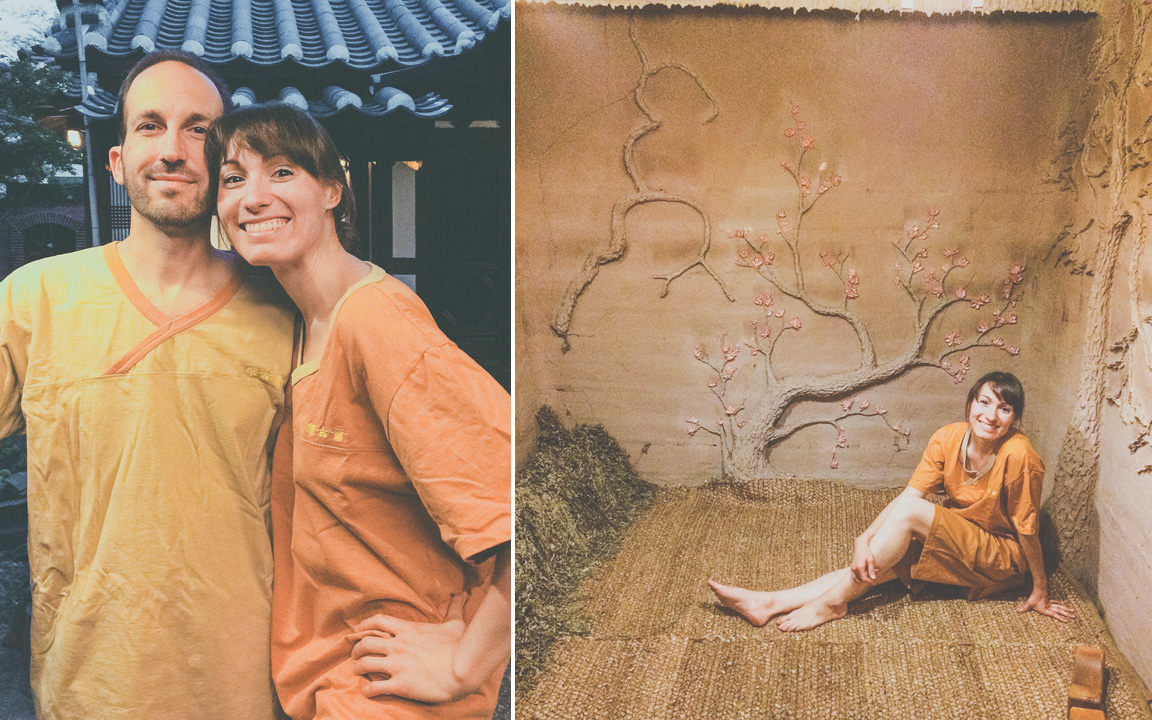 How awesome are these outfits for the mud sauna? 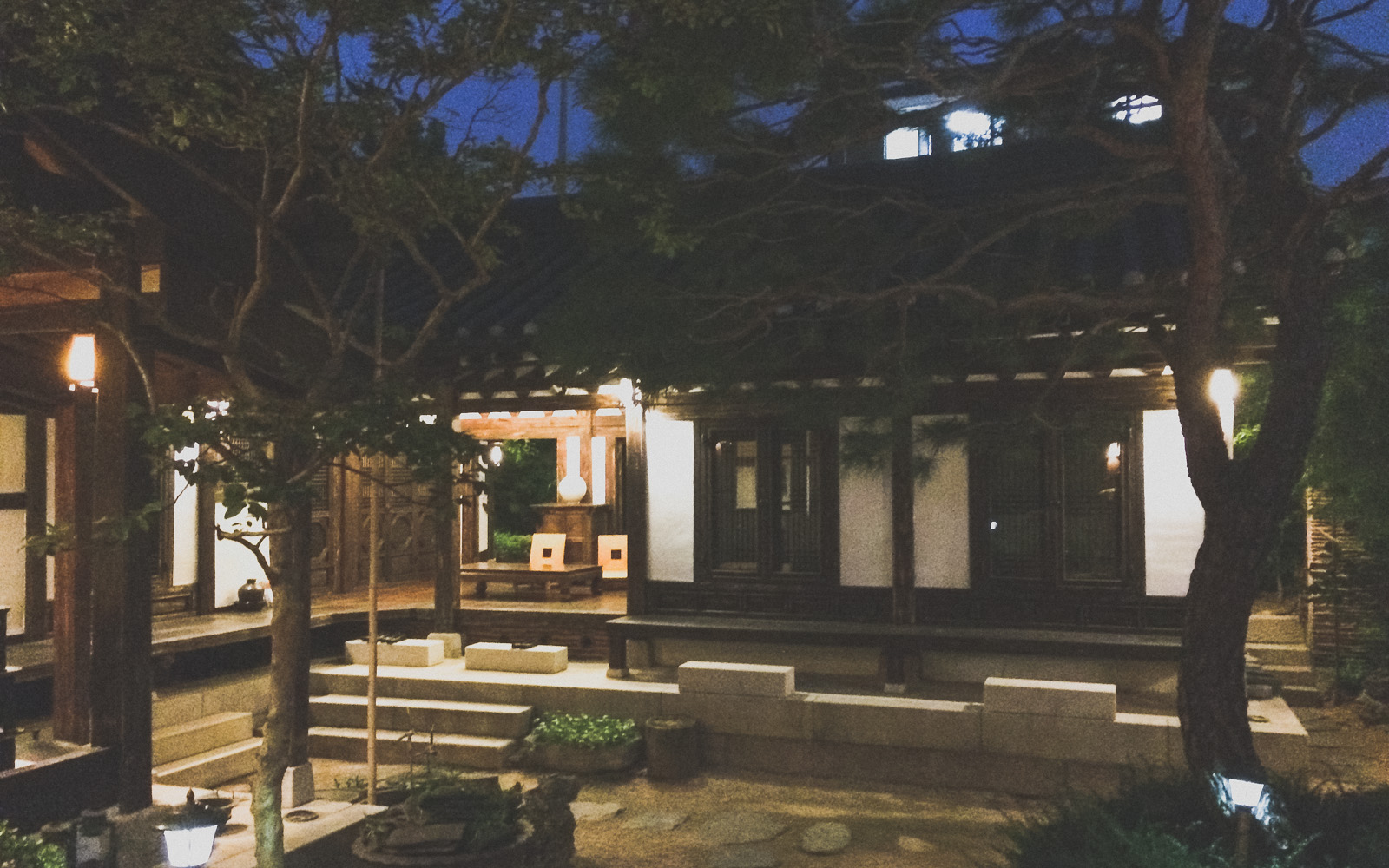 Night falls on Rak Ko Jae. Pictured is our bedroom and porch.

Jetlag and a client email woke me up at about 4am. The sun was starting to rise, so after about an hour of fighting my inability to fall back asleep, I decided to get up and go hang out with the birds. There were easily 40-50 of them that spent hours fluttering around the courtyard. It was so quiet I could hear them fly. They fluttered here and there, between the trees and the porches and the rooftops, never flying far or long. 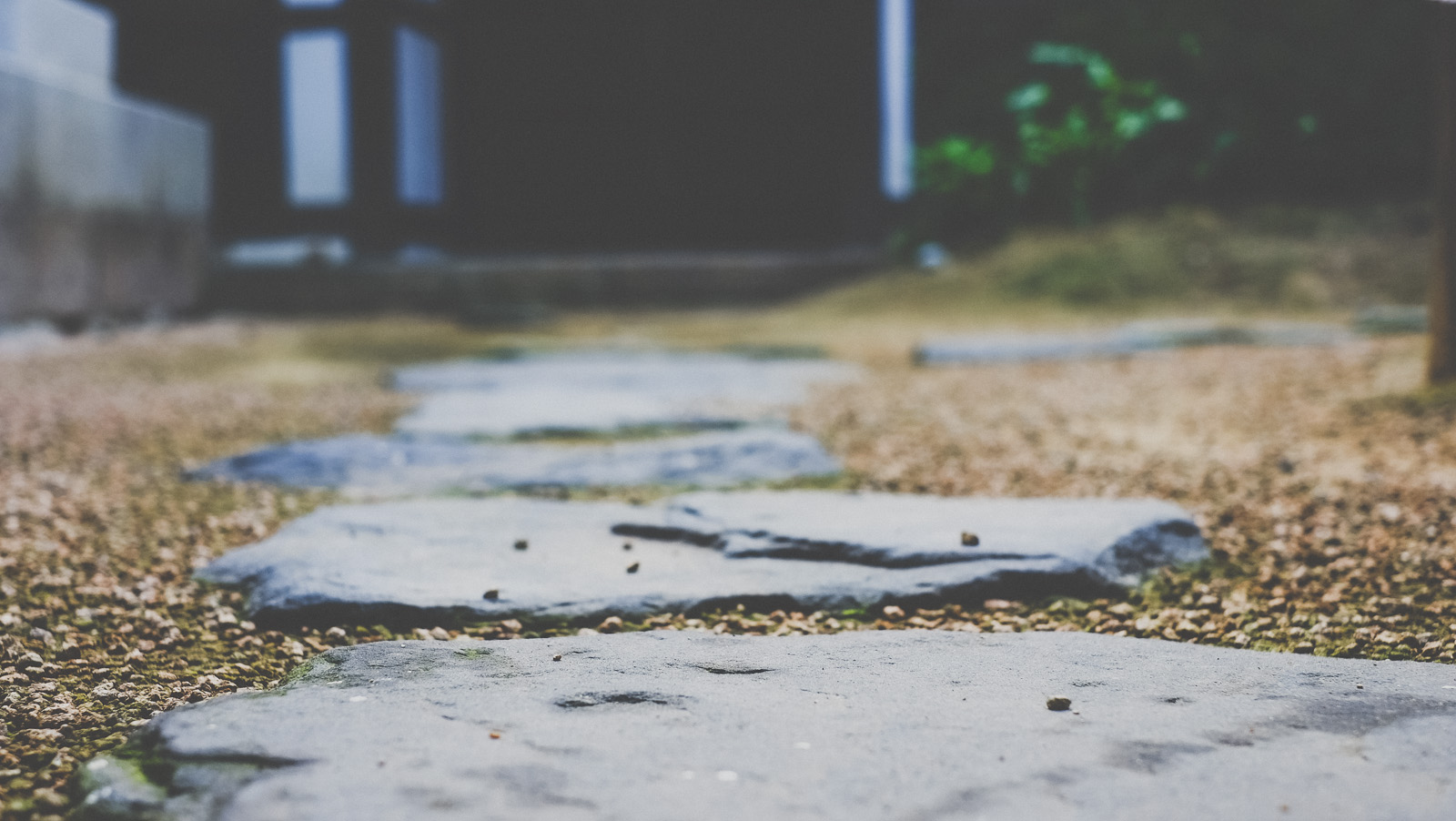 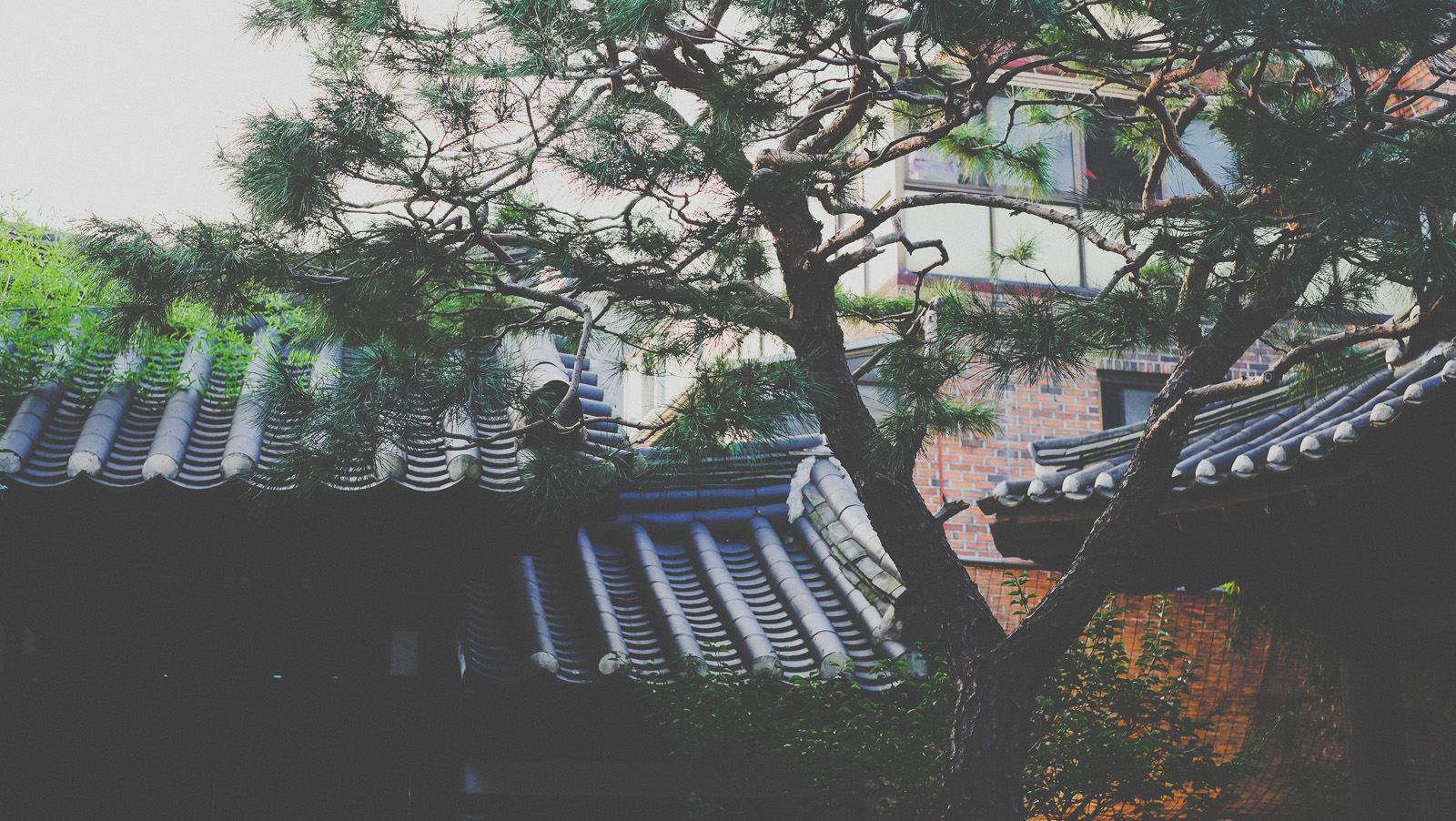 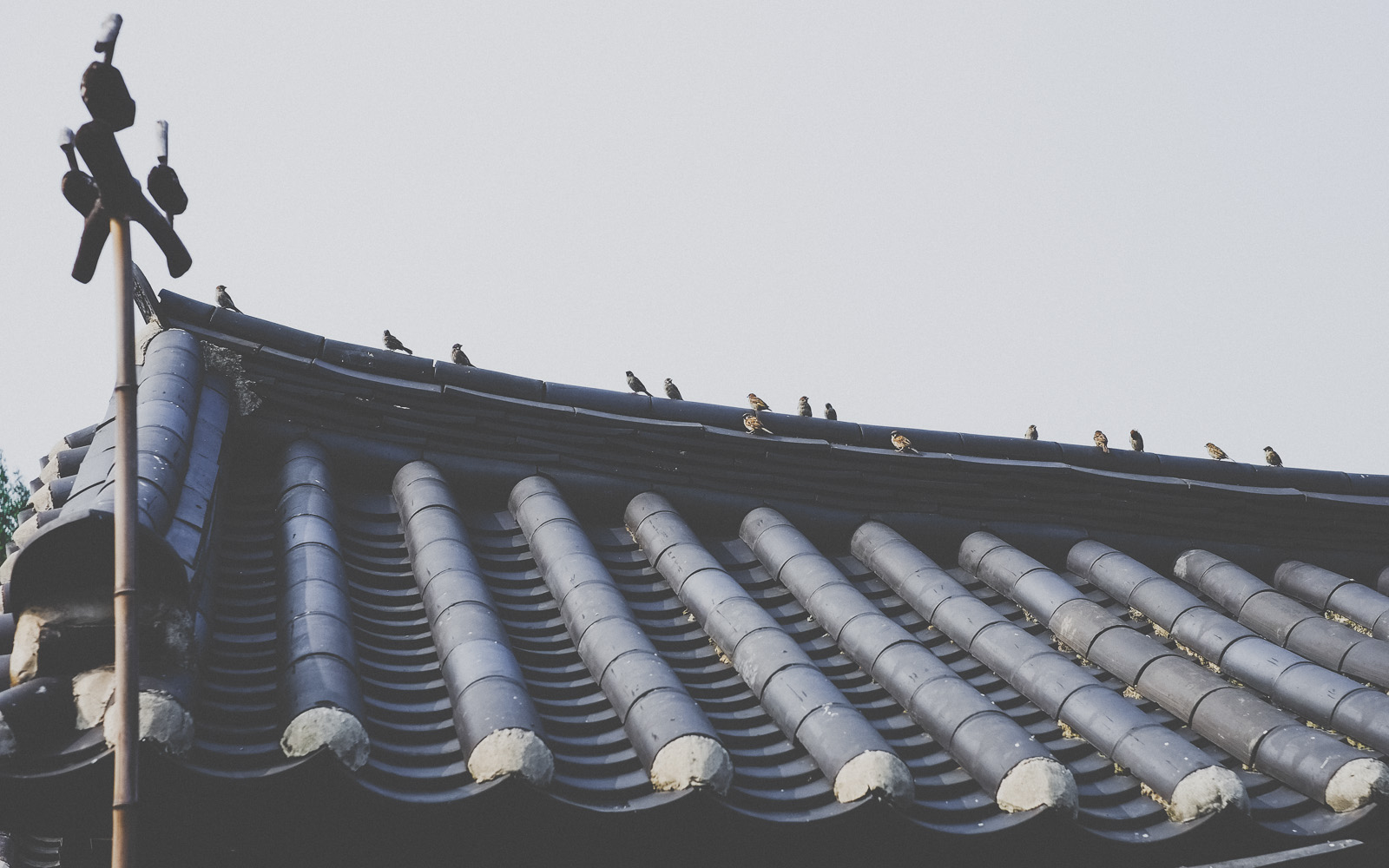 My birdie friends. They were hard to capture because they were always moving from one perch to another, but mesmerizing. I watched them greet the day for at least an hour. 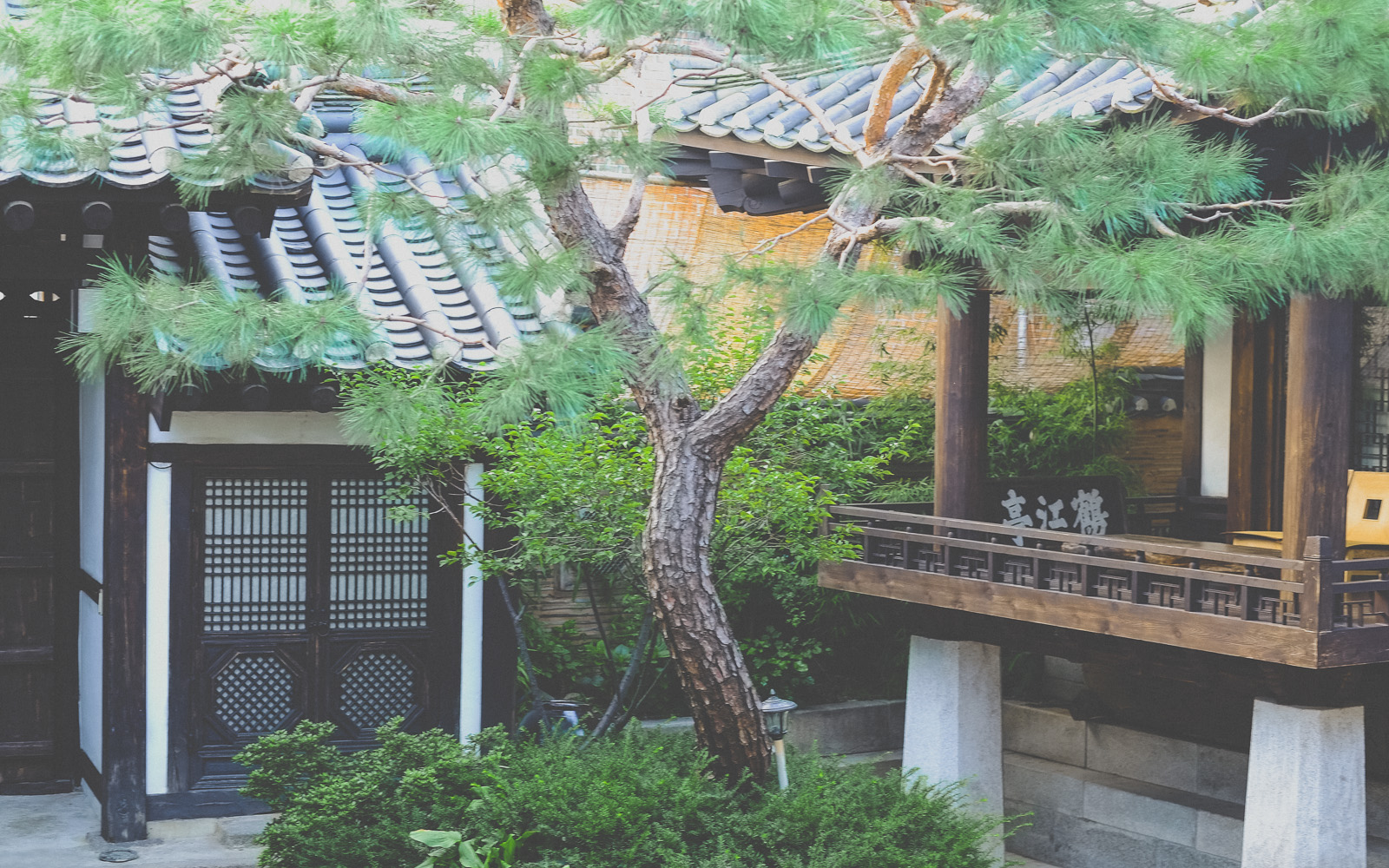 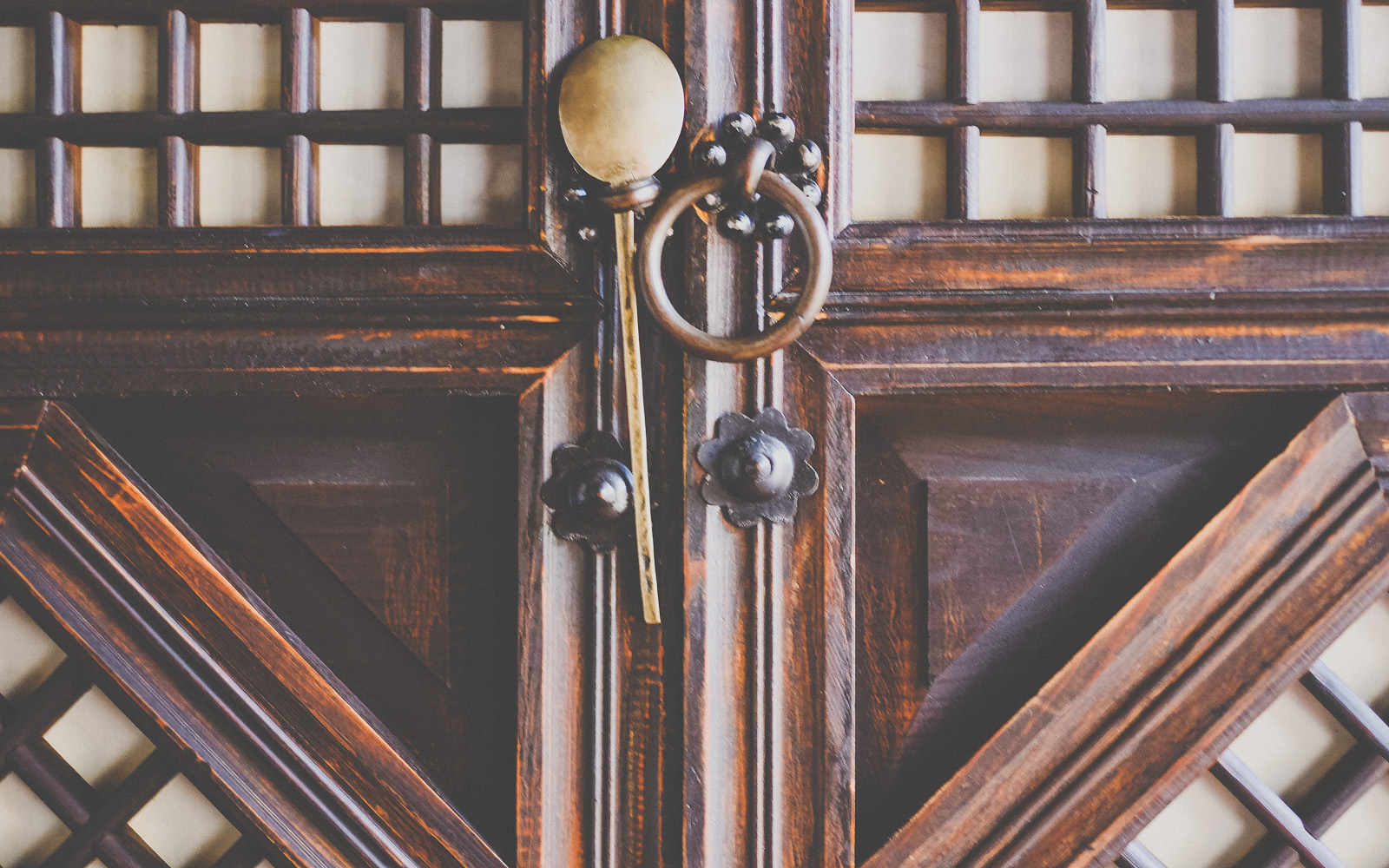 “Locked” doors. One of my favorite little details. 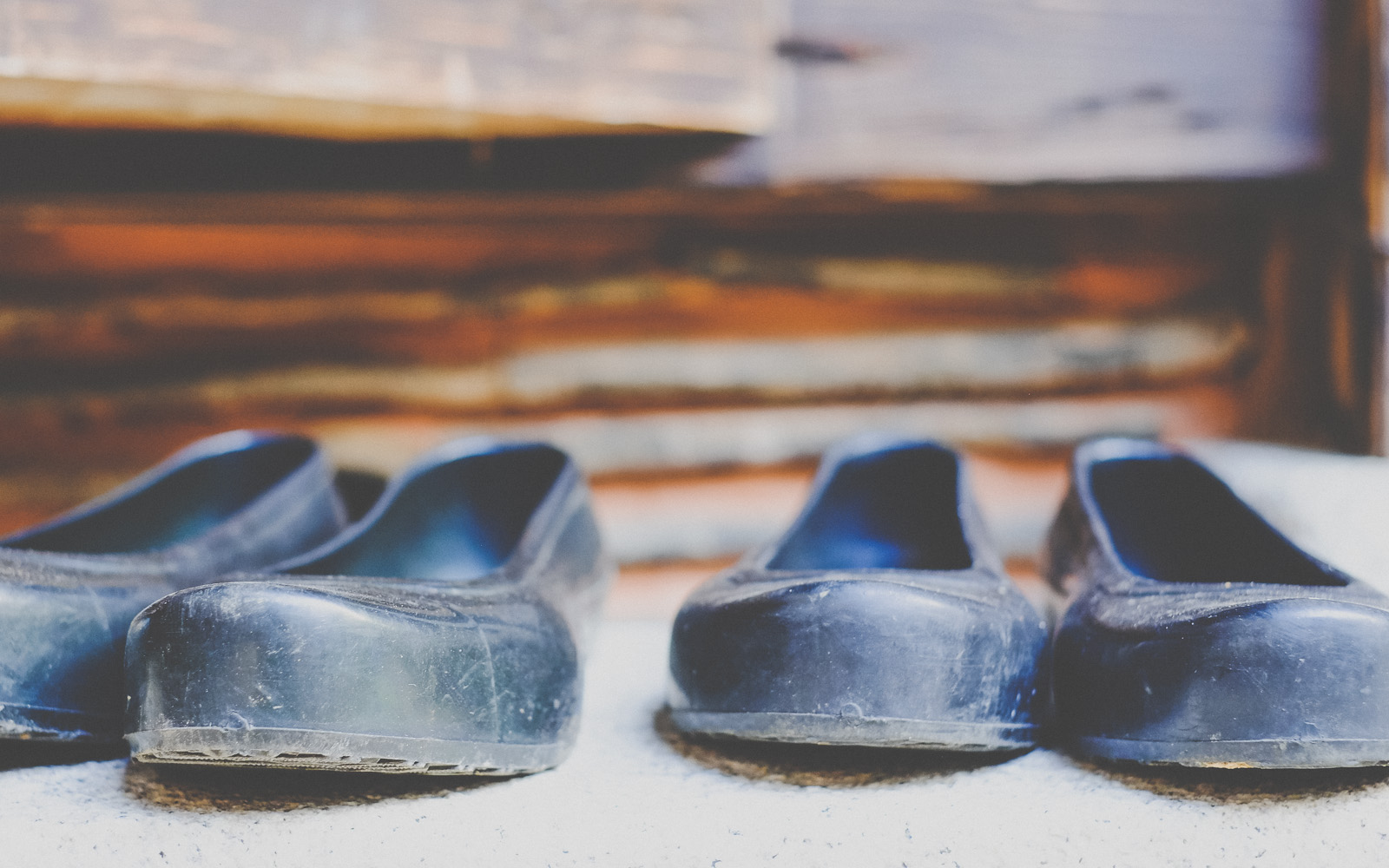 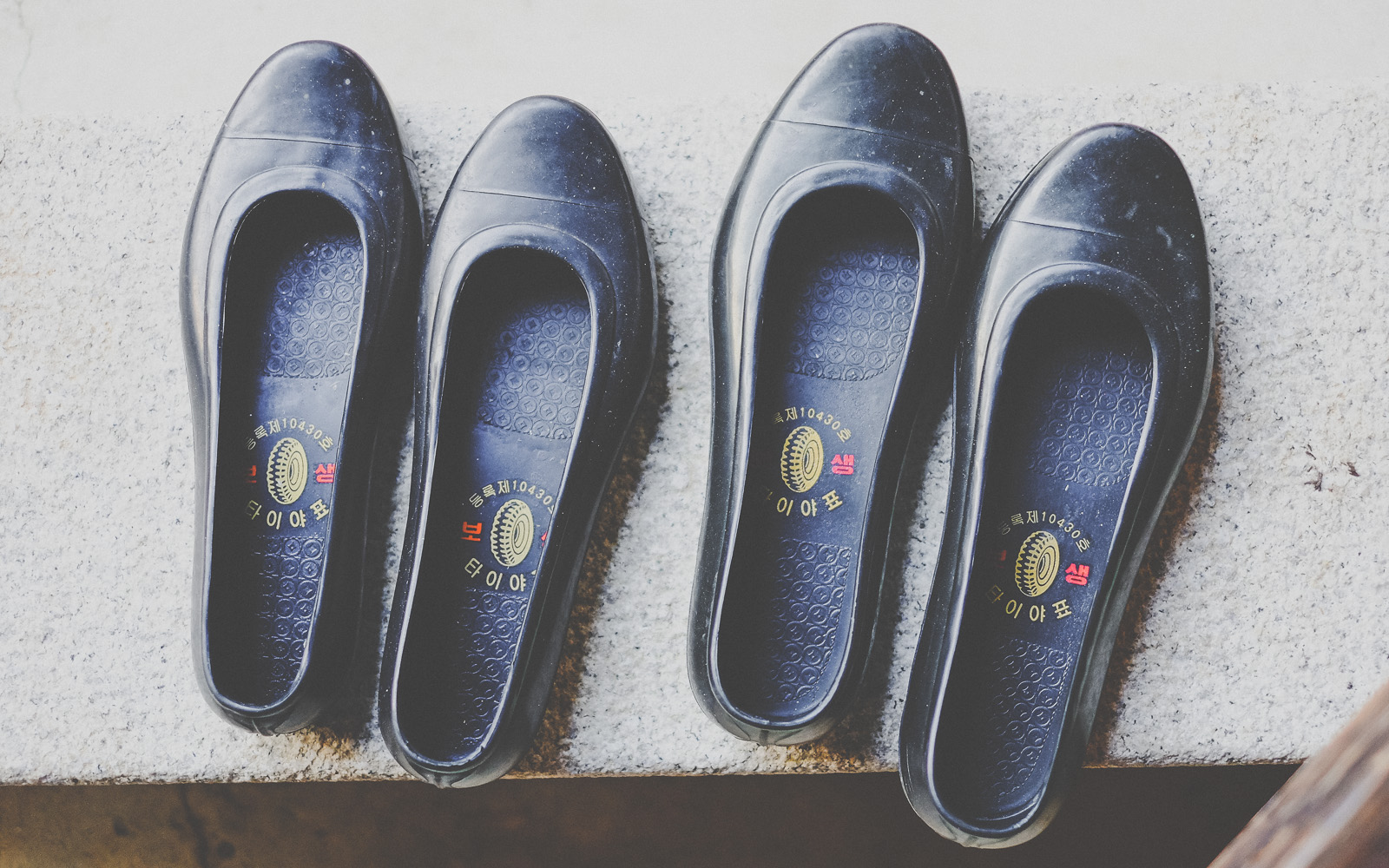 In South Korea, shoe wear is very strict and specific, and there are shoes for every space. Indoors. Outdoors. Porches. These were the provided slippers, but I still wore them in the wrong spaces.

Eventually, the rest of the world started to stir, and one of the employees emerged from her room and headed toward the kitchen with a sleepy gaze, donning her robe and slippers. An hour or two later, she reemerged from the kitchen with our breakfast, which this time we were able to enjoy on our porch. Breakfast was much like dinner: simple but filling and delicious. We had our option of a Korean or continental breakfast and we chose the continental, not feeling TOO adventurous just yet. I think the Korean version was fish. 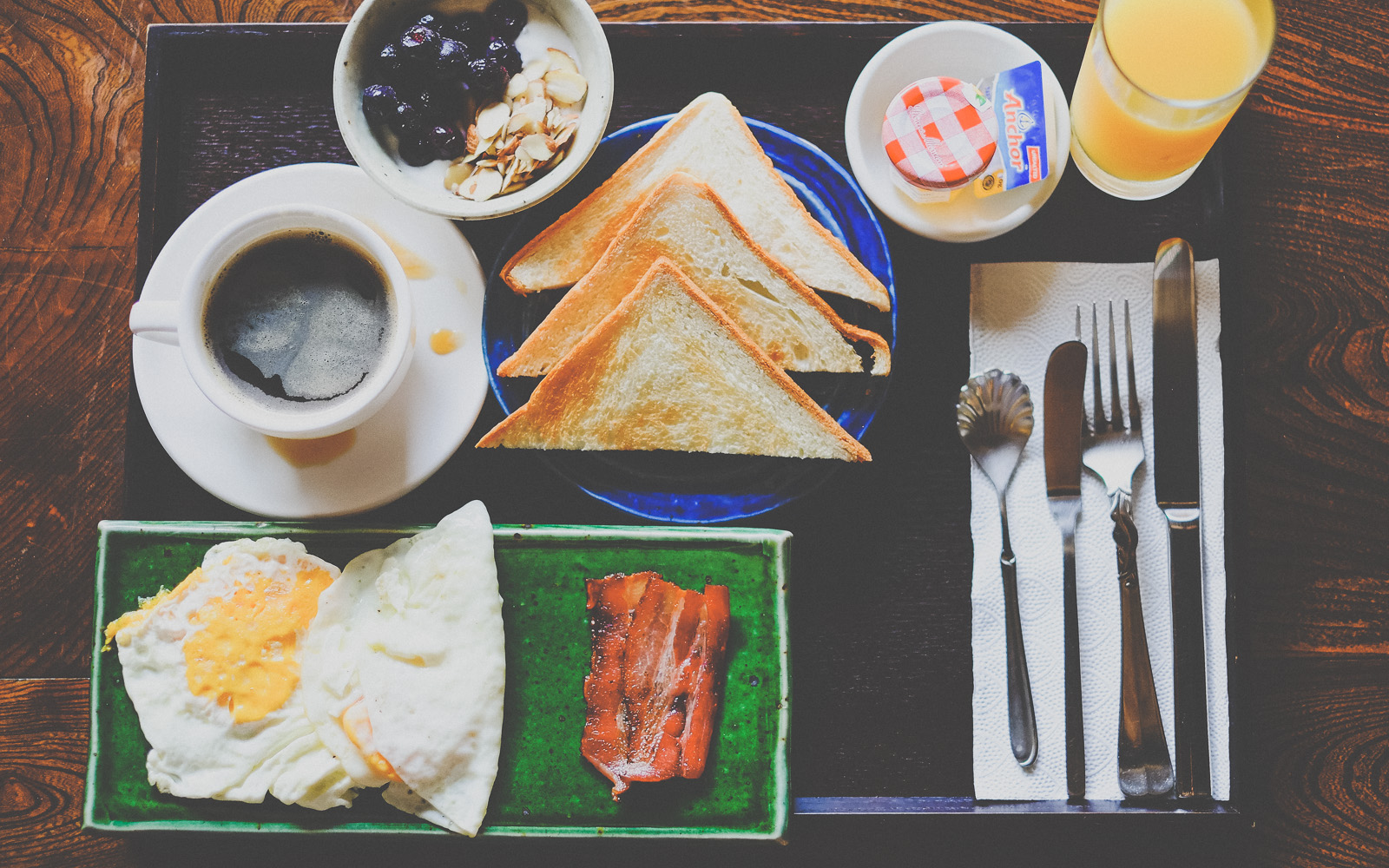 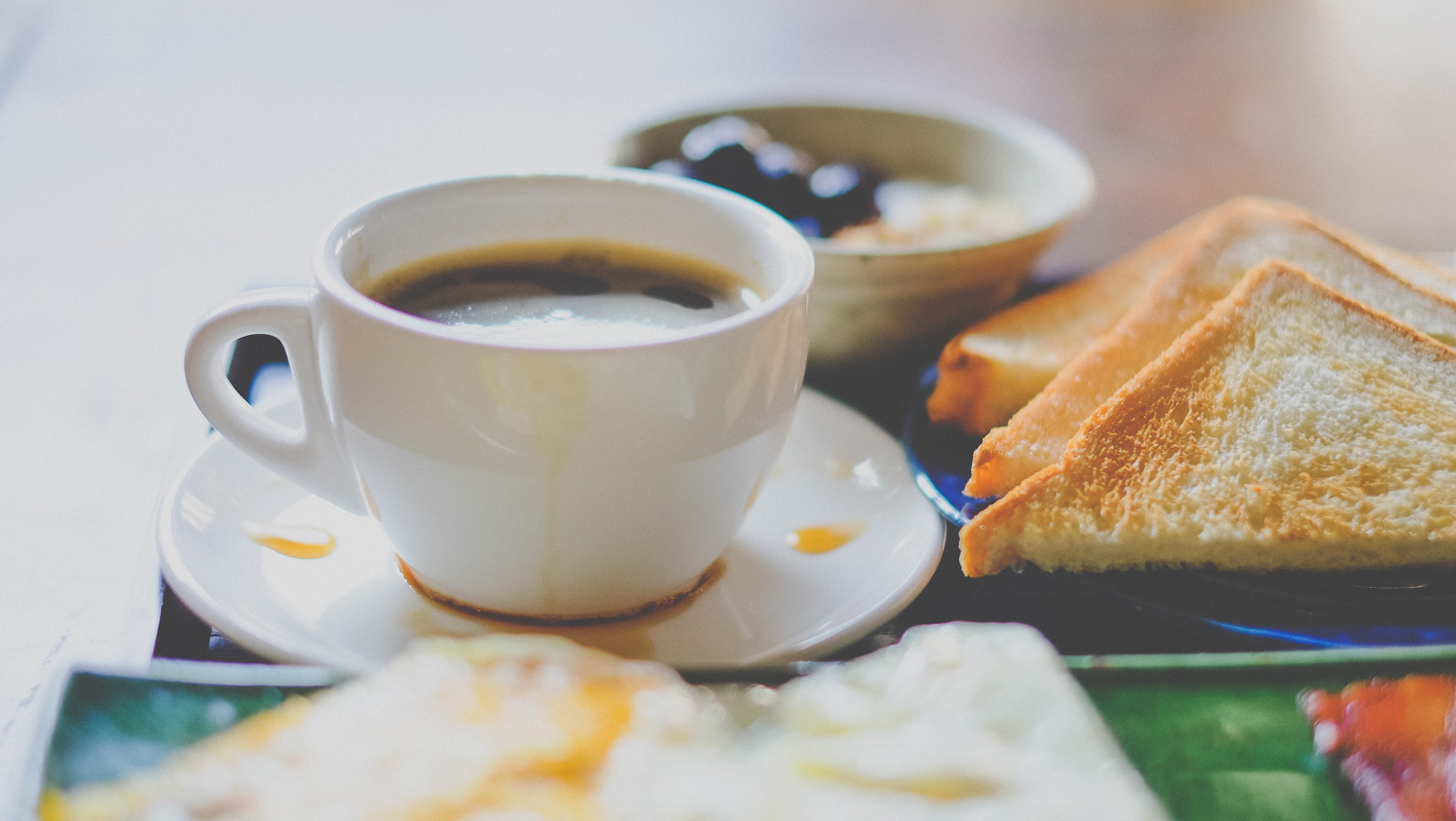 Yes. I spilled my coffee.

After our plates were cleared, I started to do some work for my client back in the states… figuring this was one of the most amazing remote work locations I’ve ever had. Jérôme worked on some photos we had taken the day before and we basically passed the next few hours on the porch. The owner actually had to come out and remind us that check-out time was approaching. We were aware, but we were just trying to soak up every last minute of the peace and tranquility that we could. After all, a very busy and active two weeks were awaiting us. 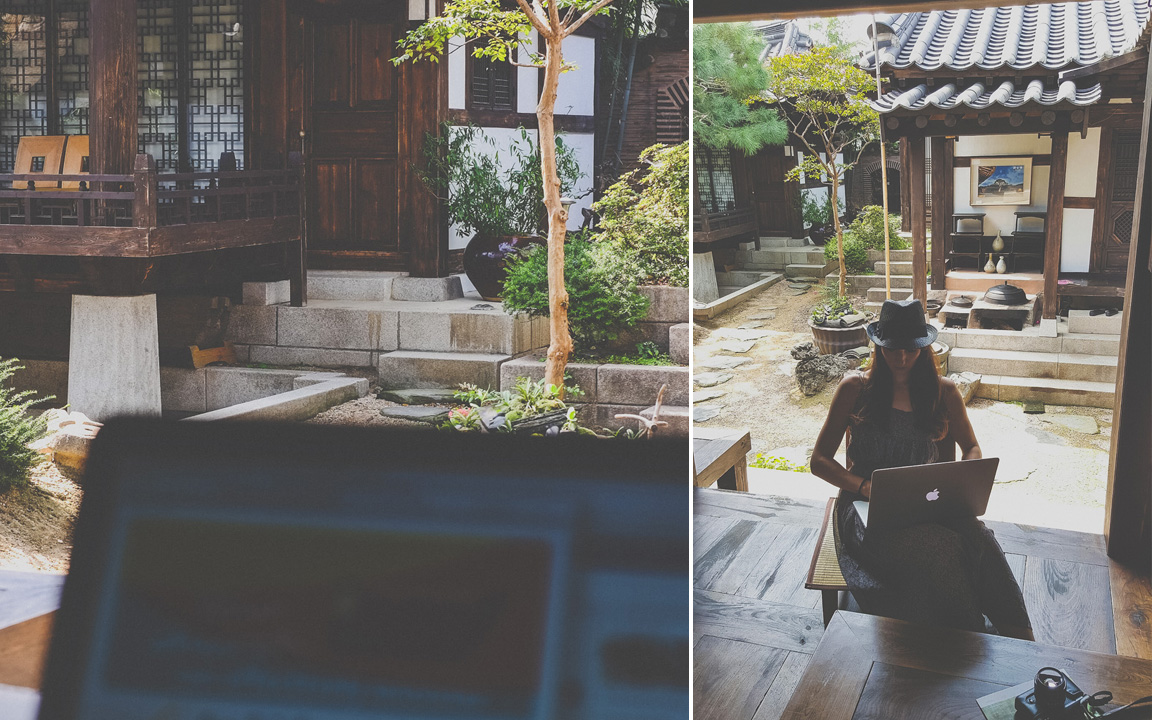 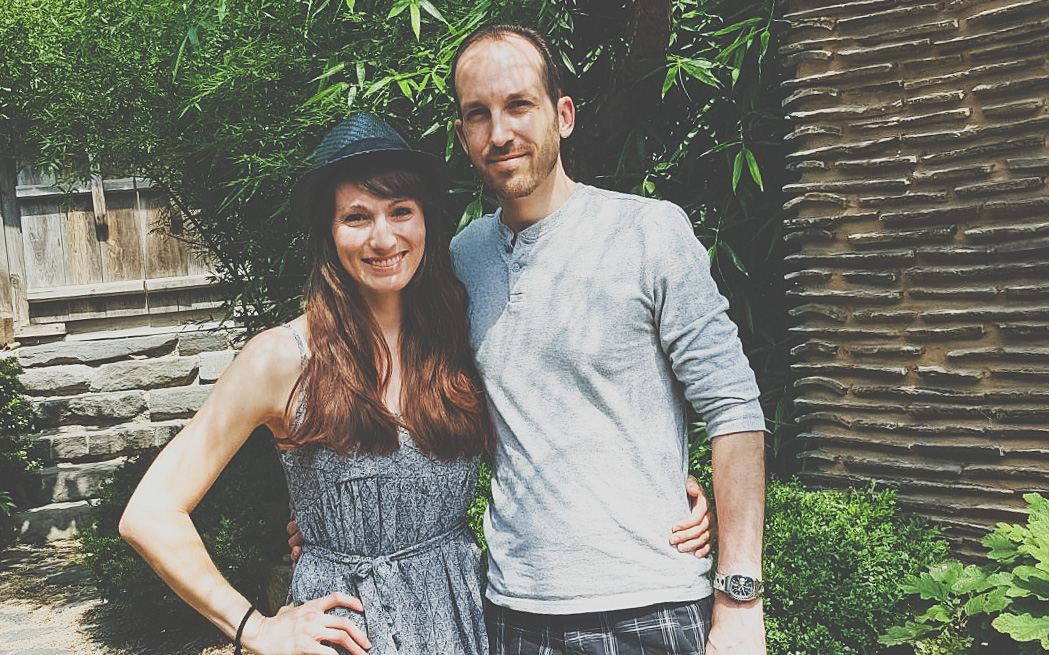 One last photo before heading out into the crazy that is Seoul and meeting up with our next host and travel buddies.

If you are like I was—researching traditional hanoks in Seoul and trying to decide if Rak Ko Jae is REALLY worth it, here is my advice:

Oh, and last but not least, I CIZED. It was the first of many times I cized all over South Korea. 🙂 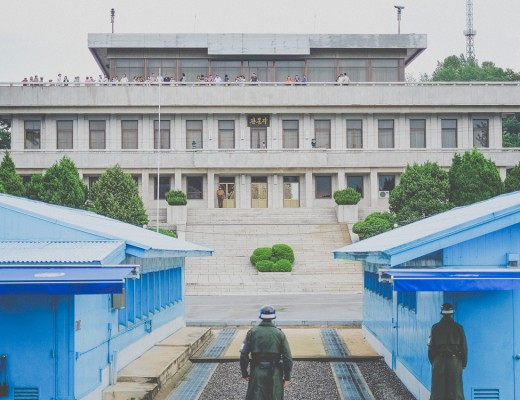 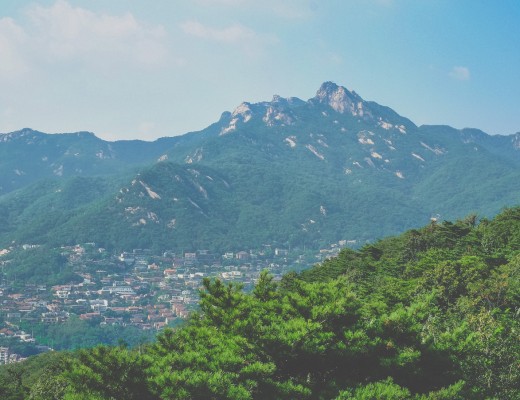 Hiking in Seoul: The Fortress Wall 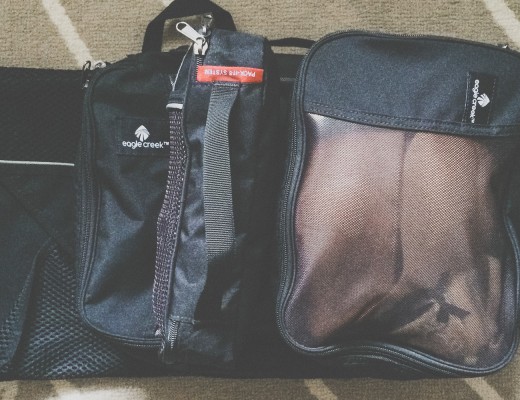